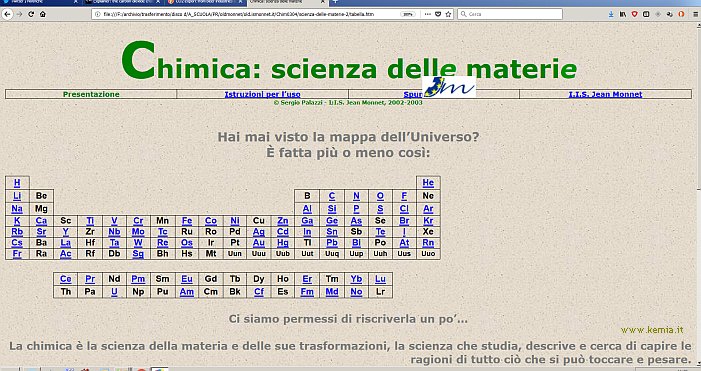 The Periodic Table as The Map of the Universe… but also resembling a school timetable.

An idea that some very young students suggested me 15 years ago and that became a website.  We had the chance to present this project at the “Scienza under 18” exhibition at the Museo Nazionale della Scienza e della Tecnologia, Milan, at the beginning of a long-lasting connection with Federchimica, and then at the two-days international conference “Scienza ed Informazione” in Como, Villa Gallia.

As 2019 will be the International Year of Periodic Table, I’ve found a backup copy of that site, and so here is the story.

In 2003 I was teaching at the Istituto Jean Monnet of Mariano Comense (between Como and Milan). One of the newest high schools in Lombardy, and one of the most innovative in Italy because of three different “experimental” courses.
I was involved on the chemical one, a “Istituto Tecnico Industriale” course about “Environmental Chemistry and Technology“.  One of the very few, and probably the best one in Italy on this topics, as I heard from many colleagues.

Our students not only had sure and goob jobs if they were stopping just after the Diploma, but the large number which were going to University had  often outstanding results – just from the first day: if they tried the admission exams at Milan Politecnico,  they always gained a very high rank, outclassing students coming from the most renowned Licei.

(btw: the reform law, some years ago, simply cancelled Chimico Ambientale from any Italian High School).

Students were asked to think that the element symbols were not about chemistry, but the subjects that they were studying at school – or that they were interested in. So, each entry linked in the table had this structure: 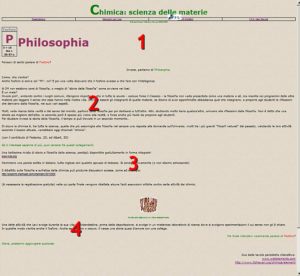 1: the alternative meaning for the symbol

2: its connections with chemistry and our school world

3: something about the real element

4: when available,  links to the chapters of Primo Levi’s masterpiece, Il Sistema Periodico.

Disclaimer: we (I) had no experience at all about HTML structures and the Web was still a wild land, so the actual structure and graphic form where rather horrible.

After a first draft, mostly worked out with boys & girls 14-16 years old, we asked to others, also from different schools, to improve it with their suggestions.

The “elements” linked in the table (at final update) where the following, listed with the metaphorical interpretation and, in case, with a quote from Levi’s book. Sodium is not a chapter, but of course the Birkenau plant produced BuNa and we made a further reference.

Some years after, the school website was renewed, then I left Jean Monnet for the Setificio in Como, and this table disappeared, also from more recent versions of kemia.it where it was mirrored.
But I feel good to show it once again.

With the kind help of my daughter Alice, who attended Jean Monnet many years after.

As the headmaster was at that time a really challenging friend,
prof. Scognamiglio, I’m also adding: Thank you again, Tommaso.